Submarines in the Dardanelles 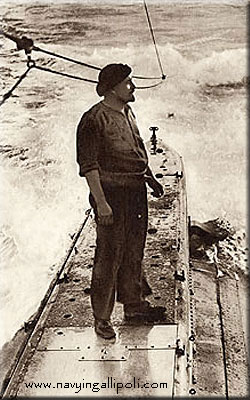 (...) A submarine sailing on the surface can be targeted formidably. If she is submerged, aiming with attention and care, man has to fire at the pipe shaped part fitted with the mirror-like device. If the submarine fires a torpedo at your ship (when the torpedo is fired, then on the side from which it comes, it leaves a thick trace), immediately and at high speed, passing by the torpedo, sail towards the submarine and drop anchor on her. If in this way the anchor catches the propeller or rudder, then it immobilizes the submarine. (...)

Instruction of the Ottoman Inspectorate of Sea Mines and Costal Fortifications, released on January 31, 1915 and concerning the means of observation and fighting against submarines.

Back to Main Page